As I walked slowly on the beach last week, I took in an extraordinary scene: a group of youngsters perching themselves on the edge of the sand and ocean water. They nudged and pushed each other to venture closer and closer to the water. Once the waves, full of force and power, came crashing to the shore, they turned abruptly and raced each other back to safer ground.

I was only in town for a couple of days, but couldn’t help but laugh at the scene. I kept waiting for one of the younger ones to fall into the ocean spray.

In contrast, the adults in the group stood stone-faced every few feet apart from each other with their backs to the ocean watching the craziness, making sure none of the youngsters wondered too far away from the larger group.

A new family at the beach? Sort of, but not exactly the human kind. I got a front-row view of a large flock of seagull chicks. I’m no nature expert, but they looked exactly like their human brethren.

They pushed and stepped on each other to head toward the ocean and then when the waves started coming in, raced back to safety. In my mind, I could see younger versions of my own kids playing the exact same game. My kids would let out a shriek: “Save us daddy, save us” as the surf rushed from behind to surprise them.

And like the fully grown seagulls chaperoning this beach excursion, I would keep close tabs on my kids, taking everything in with a cautious eye. In real life, though, the adult seagulls were, of course, most worried about me, their human intruder.

I gave the group outing a wide berth. In the process, however, I had time to reflect on my own parenting style and even picked up on a few parenting reminders. 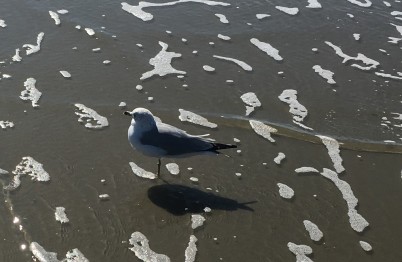 –Give your kids room. Pay attention enough to make sure nothing serious happens, but give your kids enough freedom to make their own choices. The mother and father seagulls (at least I think they were mother and father, I couldn’t really tell) watched, but certainly didn’t overprotect the infants. In this day and age of helicopter parents, I love this lesson.

–Live in the present. The larger seagulls as well as the baby chicks seemed very much to live in the moment. They weren’t overly concerned by the strong wind or passing boats. They picked at the sand and water, looking for insects, small fish, eggs, and earthworms. But they were very much present in the moment, a lesson for us all.

–Control what you can control. When an intruder invaded their space or they wanted to take a more defensive posture, the mature seagulls didn’t pick-up and head hours in the opposite direction to a completely different beach. They simply squawked a little louder and took flight. The flock would fly in a curvy zig-zag pattern, low to the ground, and move up or down the beach a short distance. With the crisis averted, they all quickly went back to doing whatever they were doing before they had picked up and moved.

–Remember to have fun. We humans all too often place human characteristics and feelings on inanimate objects and animals, but I must admit that the chicks spread before me on the sand sure looked like they were having fun in the water.