I’ve never won a Golden Globe Award given out by the Hollywood Foreign Press Association, an Emmy, an Academy Award or even a Pulitzer Prize for that matter. There’s no Grammy Awards hanging on my fireplace mantle and I’ve never thrown three touchdown passes in an NFL game or won the NFL’s Most Valuable Player award.

I was never picked first for the team kickball or dodgeball game and I’ve certainly never been elected by popular vote to local or regional political office.

I’ve never won any of those awards or honors and I can’t imagine that I’ll be chosen anytime soon, but I’m pretty sure I know exactly how the award winners felt when they heard their name chosen above everyone else’s.

When I come home from work each evening, I’m greeted  by Nittany, our ten-year-old Bichon Frise and Lahsa Apso mix dog, like I’m the epitome of perfection, like I walk on water. I’m not talking about a simple “you’re home” greeting. I’m talking about a full blown “where have you been, I’ve been waiting for you all my life” kind of greeting.

When I pull into the driveway, Nittany starts jumping up and down in our living room and trying to look out the window to see me. God forbid if I’m delayed in the car on a conference call or have to pull some things together before I walk inside. I hear cats are oblivious to your arrival. That’s not Nittany. She’ll have a heart attack, waiting for me to walk the short few steps from the driveway to the door. 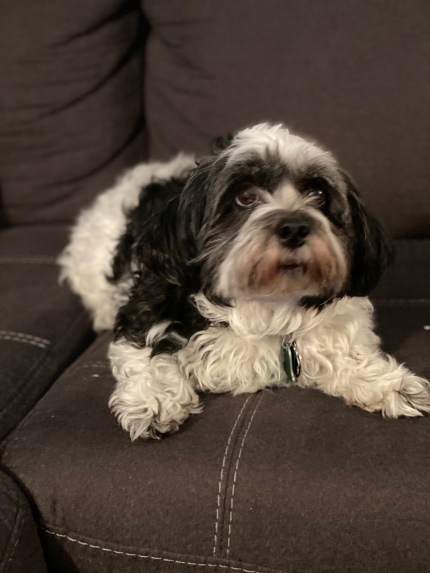 When I finally walk in the house, she runs up to me jumping and running around me. Her tongue is out and her tail wags a mile a minute. It goes on for five . . . ten minutes . . . and even longer . . . until I finally acknowledge her presence.

Nittany doesn’t tend to warm up to just anyone. Some dogs will lick and run to anybody they see. Not Nittany. She’s very choosey in whom she cuddles up too, so of course, I usually reward her with a nice juicy snack. It’s only the best for my best friend. She returns my love with a lick of my hands and by staring up lovingly at me. I don’t speak dog, but I’m pretty sure she’s happy to see me.

Her greeting for me at the end of the day, though, is night and day different from when we leave. You would think the world is coming to an end when my wife and I leave in the morning. Nittany barely looks up from her slumber. “Oh, you’re leaving me again, greeeeeaaaaat, just great. You mean people.”

I look down at her and try to cheer her up by rubbing her belly. She looks up with a blank stare that hits you right in the heart. If I didn’t know any better, I would think she’s giving us the “poor me” routine on purpose. It’s like she secretly hopes that one day I’ll look down and see her sad face and say, “Oh crap, I can’t work today. I just have to stay home with you Nittany. It’s your day, we’ll play fetch and go for a long walk and even longer nap. What do you say big girl?”

I don’t even have to think about that one. She’d say yes faster than she could chow down on one of those juicy snacks I mentioned earlier, but unfortunately work still calls  and bills still need to be paid.