I write about coming across a younger version of myself and seeing a part of me that I hadn’t thought about in a long time. 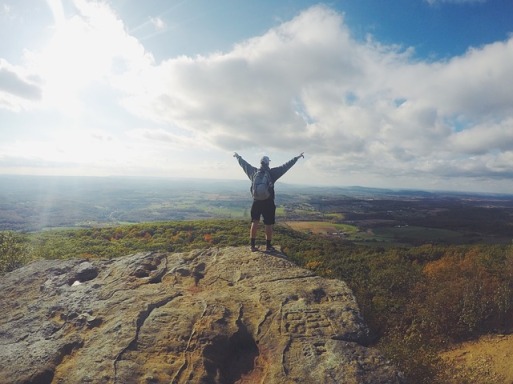 The boy, probably about nine or ten years old, threw the football up in the air — not too high, just a few feet above his head — and caught it. He walked a few more feet up the department store aisle and threw the ball up-in-the-air again. He was playing an imaginary game with him catching the winning touchdown.

I couldn’t help but notice the little boy. I used to do the same thing. I’d take a ball with me everywhere, inside, outside it didn’t matter. I’d twirl the ball high in the air, catch it, making sure to keep my feet in-bounds, and mimic the cheering crowd.

Been, there, done that

I was lost in my long forgotten memories, when the boy’s father came up to him and scolded him for taking so long in the store. “I, I, I, I dddddidn’t do anything wwww wwww wwrong,” the boy said. “I, I, I, was hhhhheee heere the whhhhoole ttttttimmmme.”

My heart broke for the boy. Unfortunately, a familiar feeling, not quite as happy as playing football, came rushing back.

As a young boy, when I was put in nervous or stressful situations, I would occasionally stutter, and stammer, struggling to get my thoughts across to whomever I was talking. It didn’t happen every time I spoke and was much more mild than the boy I saw in the store, but still frustrating for me.

I’m not sure when the stammer started, but I have many memories of trying everything I could to keep it under control. It usually came out in view when I was in trouble or felt pressured. The more pressure I felt, the more I struggled to find the word and the worse the stammer would get.

The National Stuttering Foundation estimates that more than 3 million people in the U.S. stutter in some form or another. Fortunately for me when I grew into adulthood, went off to college, and gained more confidence in myself, the stutter disappeared.

I notice that the stutter shows-up once in a while, but it’s usually out of the blue and nothing like what I experienced as a child.

In any event, I still remember the way it separated me from others and made me feel different. I guess that’s why I couldn’t resist casually telling the two of them that the boy had a pretty good arm for his size and that the father was lucky to have such a well-behaved son.

Overstepping my bounds? Probably, but I figured the kid could use all the help he could get. In my head, I thought: “You go kid.”