I can still hear the metallic crunch.

Twenty five years later, if I close my eyes, I can still hear the crush of metal upon metal. I had just bought my first new car. I was working as a small-town newspaper reporter and had gotten a great deal on a new Geo Storm.

The beater-up car that I had been driving, an old Renault Encore that my brother had generously passed down to me, had finally given out. I wasn’t making a ton, but I had scrimped and saved and had picked through my budget enough times until I found the money to cover the cost and maintenance of a new car. 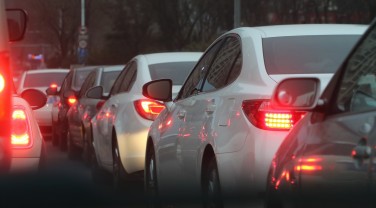 I came home with the Geo Storm on a Thursday and showed it off right away to my parents. They couldn’t have been happier for me. I happened to mention to them that when I got off work on Friday I was planning to make the three-and-a-half-hour drive to Alexandria, Virginia to spend the weekend with my long-distance girlfriend. My mom asked if that was really the best idea to put so many miles on the car so soon. My dad and I joked that cars are meant to be driven and that I would be fine.

I got caught up in a mini-emergency at work the next day and got a later than normal start for my trip. I momentarily considered cancelling or leaving early on Saturday, but I was too excited to change my plans. Who would have known something bad would happen?

In any event, I made it to the American Legion Memorial Bridge along Route 495, crossing from suburban Maryland into Virginia, without any problems. I felt lucky that I made it to the bridge when I did. An hour later and the five lanes of traffic heading in each direction would be a glorified parking lot.

However, the next thing I know, the driver behind me slammed into my rear end. Crunch. Crush. In that one instant, my new car,  my two-day-old new car, wasn’t so new. All my hard work . . . gone. Up in smoke.

The car was drivable, but looked like a Godzilla-like character took a big, monstrous bite out of the rear. My insurance carrier clearly placed the fault with the other driver and took care of the thousands of dollars worth of damage that the crash caused. In my mind, however, the car never drove the same. I always felt like the car drove differently — with more noise coming from the rear and not quite as smooth.

The day ranks as one of the worst in my life.

I felt like all that I had worked for was lost. My girlfriend though helped me see through my angst and gloom, to be grateful that I escaped unharmed and that the car could be replaced, and to even grudgingly see the humor in the situation.

In that moment, I saw how lucky I was to have her in my life. And before I left to drive my damaged car home, I told her for the first time that I loved her. It became the first of many times to come.

In the end, my worst day became one of my best days.