In my December 2015 blog, Taking a walk in Mary’s footsteps, I posted some thoughts on what Mary might have been thinking about as she gave birth to Jesus. I continue the story by offering a glimpse of how I imagine Mary suffered, seeing her now-grown son crucified on the cross, and how she came to her faith in the resurrection to come. The Bible (and other writers) have described this story better than I ever could; these are just a few simple thoughts that help me personally to better understand the crucifixion story. Hope you enjoy.

I watched my son die today.

His name was Jesus and he died a horrific, unspeakable death for crimes he did not commit. He died for us.

My family and friends are urging me to rest. They’re worried about me. My sister Mary, Mary of Magdala, and John had to carry me from Golgotha, that awful blood-stained hill, just outside the city gates and later to Jesus’ tomb. I understand their concern. I’m exhausted and I know I should rest, but nothing will take away the image of my beaten, bloodied son stretched out and nailed to that cross. My son, the son of God, suffered and died today for our sins. I’m heartbroken. My beautiful, beautiful baby is dead.

The men took him down from the cross and laid him in my arms. I wiped the blood and dirt from his face and I held him the same way I held him oh so many years ago when he fell as a child. I would hold him close to me — close to my beating heart — and in time his tears would turn into a smile and he would stand up and run off to play some more. I held him once again close to my chest, my tears washing down onto his face and I prayed for a miracle. I prayed that he would stand up again, brought back to life the same way he brought back his good friend Lazarus.

The minutes passed though and I knew he wouldn’t be returning to me today. I thought about the day the Angel Gabriel came to me to tell me about Jesus. “Behold, you will conceive in your womb and bear a son,” he told me. “And you shall name him Jesus. He will be great and will be called Son of the Most High, and the Lord God will give him the throne of David his father, and he will rule over the house of Jacob forever, and of his kingdom there will be no end.” (Luke 1: 31-33)

I hold Gabriel’s word deep in my heart, but the pain is still unbearable. Jesus’ warnings about his ministry in recent months had been getting more ominous. Coming into the city, Jesus took his disciples aside and told them “the Son of Man will be betrayed to the chief priests and the teachers of the law. They will condemn him to death and will turn him over to the Gentiles to be mocked and flogged and crucified. On the third day he will be raised to life.” (Matthew 20:17-19)

Some of Jesus’ followers were confused by what he said and they asked me if I knew the meaning to what he was saying. He told me many times that he came to save us from sin. I’ve long accepted Jesus role in saving the world, but I still have feared this day. No mother wants to see their child in pain. No mother wants to see this for their child. Despite this struggle, my faith in God is strong. God is powerful and loving and caring. I know that he’ll be with me throughout this ordeal. I know he’ll be at Jesus and my side, but it doesn’t make this burden any less daunting.

On the long trek to the Place of the Skull, I went to Jesus. We touched ever so gently. For a short few seconds, everything else — the militant soldiers with their whips and spears, the screaming hordes of people, the weighty cross, and his battered body — were gone. He willed me to look past the blood and the pain and onto everything he stood for in his life: faith, hope, and love. In that brief moment, it was just him and me. I could feel his love for me, his mother.

And then the soldiers ripped Jesus away from me, pulled him to his feet and forced him once again to carry that rough, heavy cross. The weight of the cross weighed heavy on Jesus. The soldiers pulled a traveler from the crowd — I believe he called himself Simon of Cyrene — to help carry the cross. Jesus fell twice more. Each time he fell, it felt like the soldiers were striking me with their spears. In time, though, they had my son strung up on the cross like a common criminal.

I fought through the crowds, the hordes of people, to be near him. In his greatest discomfort, at the peak of his pain, Jesus continued to look out for me and to make sure that I’ll be taken care of and comforted. He looked at me and commanded, “Woman, behold your son.” And then at John and said, “Behold your mother.” (John 19:26-27) My son, our savior, taking care of me until his last dying breath.

And in his death, he continues to take care of me.

As the reality of the past few hours settles in, the grief that I’m feeling is overwhelming. I reach for Jesus and am reminded that he’s not here. I turn to tell him something and I’m struck with a forceful blow that takes my breath away.

I know God will protect me like one of his sheep. I cling to God’s promise. Despite everything that has happened, I pray simply to God to give me strength to get through the night and the coming days. 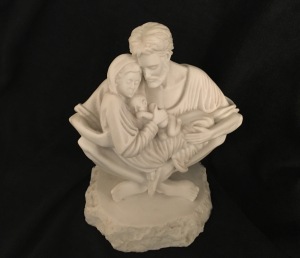 I pray that Jesus’s will be done, that he will indeed rise on the third day. In fact, his words caress me now. They prop me up and push me to carry on for another day. I pray with . . . anticipation. They give me faith that I will indeed see him once again and hold him close to my heart. I look forward to that day be it the day after tomorrow or twenty tomorrows. I pray to be with him again.

I pray too for his countless followers. I pray they have faith for what’s to come.

I pray for all of us. In this horrible, wretched time, I pray the words he taught us: “God your will be done.”

(I hope you’ve enjoyed my story. I’ve tried my best to stick to the details spelled out in the Bible. I apologize in advance for the many errors and omissions that I’m sure that I have made.)

2 thoughts on “Through Mary’s eyes: The day Christ died”